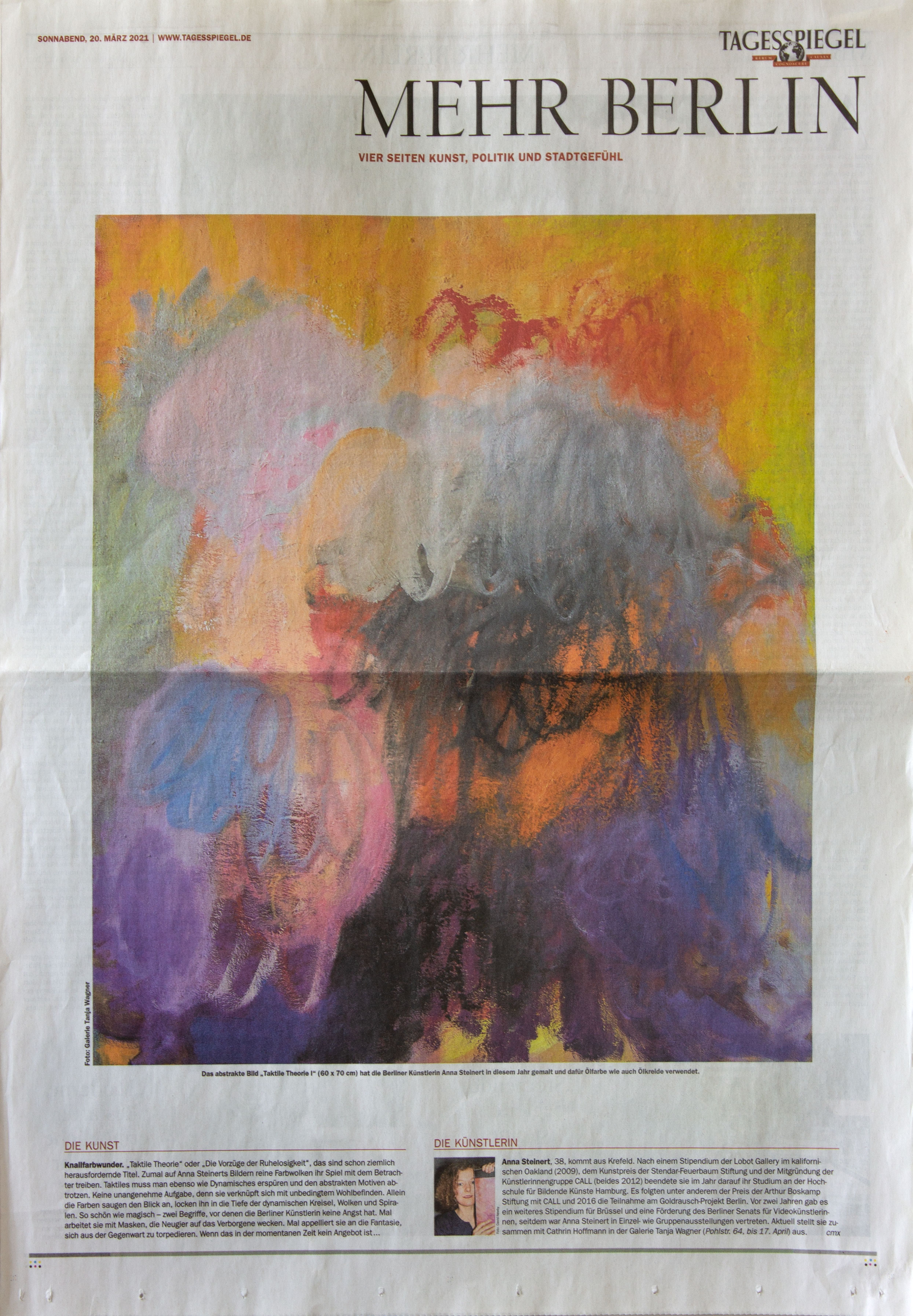 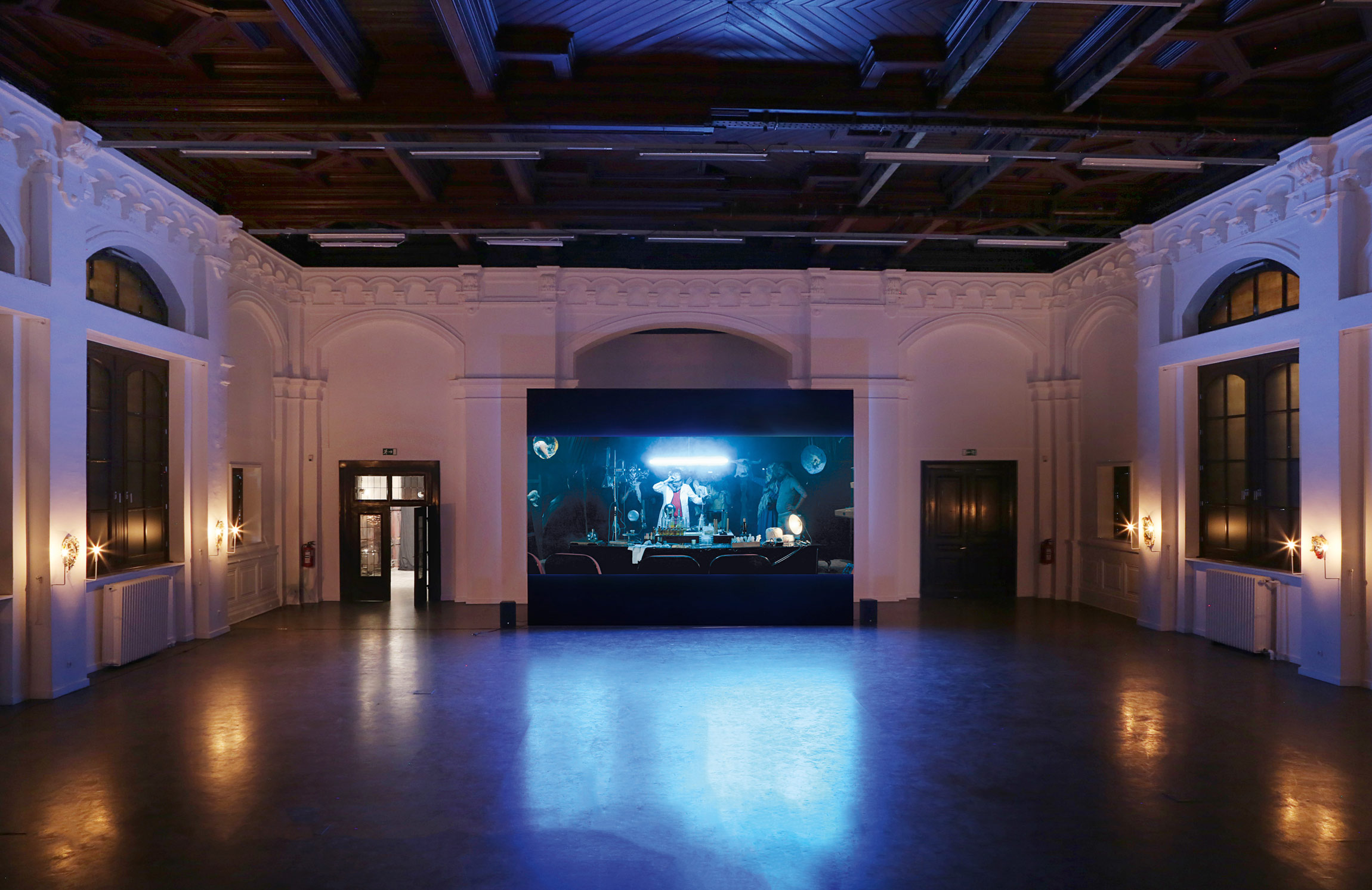 What Dreams May Come

“I have had a most rare vision. I have had a dream, past the wit of man to say what dream it was.”
– William Shakespeare, A Midsummer Night’s Dream

They stand there, shoulder to shoulder, jostling to get a better view, eager for it to be their turn, for the waiting to end. There are feathers and finery, embellishments and wigs, louche fans at once coy and sensual, waved by delicate wrists. We are presented by a sort of demented Versailles, a masked ball with all the finery of the court of the Sun King, laced with an air of expectation, desire and the gleefully unhinged.

These masks, which hide the faces of the cast in German artist Anna Steinert’s newest film work, Besuch einer Vorstellung (2016) – whether large and dramatic or simply painted on – draw on the artist’s enduring interest in the role of the mask and its ability to both hide and reveal. A mask is freeing – it allows its wearer to take on another persona, to both erase oneself and create oneself anew. Yet it is also a marker – its pattern and style can reveal where it was made, what period it belongs to and, sometimes, why it was worn. Steinert, however, takes all of these ideas and remixes them into a brand new lexicon – what we see is familiar, yet foreign. Indeed, the motif of the mask appears across not just her film works, but her paintings as well – the question of the authentic self is ever in flux.

As such, Steinert draws on a vast visual library of literary and cinematic influences when building her experimental films – from the tales of E.T.A. Hoffman to the movies of Jean Rouch and Maya Deren. She seamlessly melds visual cues into her own unique language, harking to the strong colour palettes and luscious tableaux of Peter Greenaway coupled with a more raw aesthetic that is at times Coney Island carnival, at others, brilliant freak show, a dash of Donnie Darko with a twist.

Like previous works before it, Besuch einer Vorstellung is an intriguing combination of masks, semi-surreal soundtrack and a sense of otherworldliness. There is an element of Shakespeare’s mischievous sprite Puck in the figure of the strange gatekeeper who initiates our gilded visitors into the performance they are queuing to see. In fact, rather like A Midsummer Night’s Dream, we are presented with a play within a play – we become aware that we, as an audience, are watching this audience watching… what? A witch, a magician, an alchemist, a sorcerer with magic potions – we can only dream of the Peyote-like visions that are about to be induced as the scene melds into fiery scenes of Bacchanalian celebration, tribal drumming and dancing around a totem pole.

Steinert’s free-form directing style is evident in the energy and spontaneity we see in these characters’ improvised ecstatic rituals, the rhythm building to a euphoric release, a feeling of transcendentalism. But there is tension too – where are they going, our revelers, and what sublime ecstasy is at their fingertips? We are suddenly aware of our place as the outsider, looking in. Then, as if awaking from a faraway dream, in the pale light of morning, we see the husks of the night before. Masks rotate softly in the air, empty sockets gazing back at us, eerie, haunting. What have these eyes seen? 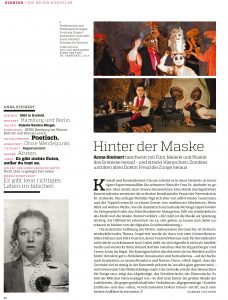